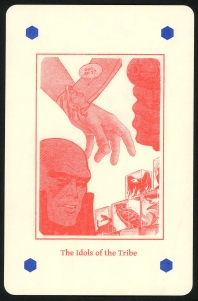 The first group of idols confirms our suspicions about our own inadequacies. They serve as the basis from which the other idols arise because they allude to the extent that man’s perceptions may lead him. This primal shortcoming was expressed by the English Romantics upon discovering that this visionary struggle has endured since the imagination’s plight from cognitive perfection. It is not a memory, but traces of that unbridled unity that point to the gaping vulnerability that these idols prey upon. For such a loss can, at best, be reconstructed in representation for interpretation and from there, the projected risks grow exponentially.

The second group of idols begins where this undercurrent leaves off. The idols of the cave set their misconceptions on the privation of being, which is both a burden and a privileged serenity to those who are confronted by experience. The condition is the same, but the variables fall across a very wide spectrum that trails off into a fine point. Bluish casts lingering in more distant planes are painted in to make the scene appear more real and these vacuous truths are truly misperceptions that convince us of our naturalism. How much is activated by the will or by circumstance is nullified by its very process, which is assimilating individualism into cavernous walls, glistening with innumerable degrees of depth and texture formed by its own history.

The third group of idols introduces deliberate intent into their sphere of influence. In honor of the idols of the marketplace, the operas are produced and performed, reenacted, re-scripted and re-adapted with a new urgency. Faint prattle seeping from other rooms transpire seamlessly with the flow of hours. The contentious cycle is perpetually renewed with digressions and breaking interruptions but the slightest allusion to the exhibition’s architecture is forbidden since truth and opinion have coalesced into one. Czars in departmental decorations are shot against unseemly interiors and the latest caption conceals their bloodless wounds.

Those attributed to the fourth group of idols embody their roles within the mythology of culture and opinion, whose presence was personalized by the idols of the marketplace. The idols of the theatre represent those who cross into mortality’s affairs and speak in unison to the collective ear. Their artistry blows thoughts with swift measure down the currents of the times and these idols appear now, more than ever, as gods with their magnificent dress and cantor following them into the afterlife. Their words float to the pinnacle of the fleeting moment. Both the universal and the particular are subject to their crafted admissions, for they are often easily, and perhaps intentionally, confused.