A PALIMPSEST OF WHITE NOISE 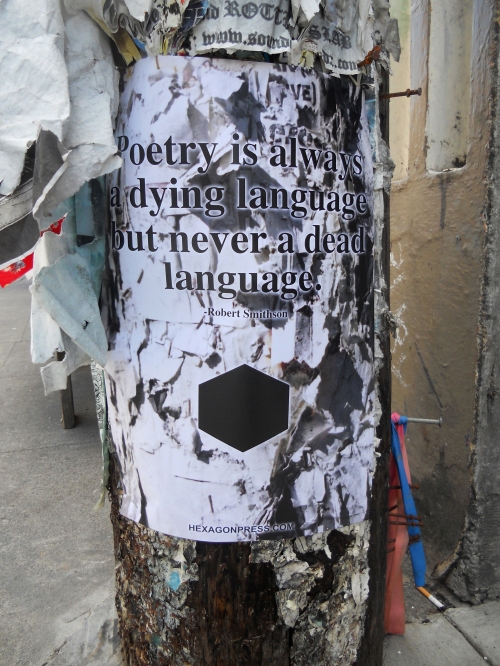 “Look at any word long enough and you will see it open up into a series of faults, into a terrain of particles each containing its own void. This discomforting language of fragmentation offers no gestalt solution; the certainties of didactic discourse are hurled into the erosion of the poetic principle. Poetry being forever lost must submit to its own vacuity; it is somehow a product of exhaustion rather than creation. Poetry is always a dying language but never a dead language.”

Poetry is not a dying language, in the colloquial sense. If it ceased to exist, its past erased, it would be like a disembodied spirit awaiting recapture by a successive host. The process of creation that is seeded in poetry is a perpetual state of dying. It is a cycle of decay that one enters into just by transcribing a thought and giving the ghost its shell, but surely this is a necessary sacrifice—what matters is one’s awareness of this sacrifice. 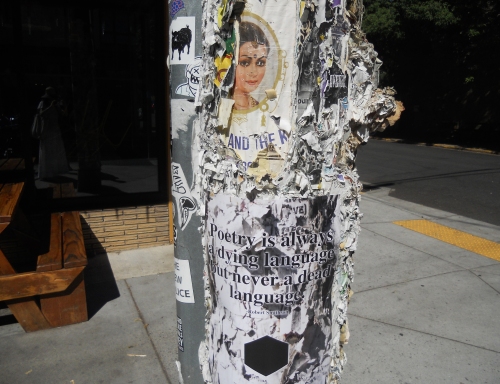 Layers of paper congeal into a crude mâché that hardens between bouts of winter rain and through the long stretches of summer’s light. These fragments of signage suggest an absence that only grows larger as innumerable black recesses emerge from out of the magnification—the enlarged thing begins to break down as its details populate and expand upon the craters and fissures until they take over the entire view, revealing the depth of absolute black and the ground from which any one thing may arise. The words themselves are activated by the imposition of thought and their tangibility is necessary for the exchange—it is in this revealing act that we see erosion move in and out, while always drawing near to pure black.

There is never an end or solution, and this process of erasure becomes the driving force of language. Matter broken down to its ultimate end becomes mere particles, which is the closest it can come to knowing destruction. Language is not so different—poetic verse is like the basin of a foregone lake and the varying levels of magnification disclose different ridges and recesses that open into new terrains filled with microscopic faults of their own. Erosion is by no means limited to physicality. It requires only a starting point and from there it will lead itself along its own path across the course of time. It reveals itself as an attempt to bridge the insurmountable gap between the thing itself and its representation, and when it is fully employed its faults become all the more apparent. There is never any resolution, only the increased tension of what is contained. 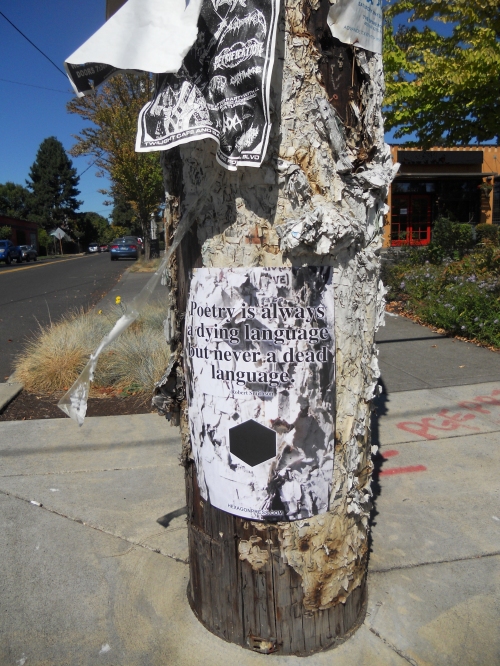 Any constructed thing is subject to its own process of decay. Language is an invisible construction whose reflection can be projected back onto itself, meaning that it can be re-conceived at will because it is always dying but never dead. There is no act of completion nor any closed circle because it always falls short of what it strives to contain and the accumulating pressure causes new fissures to erupt. Poetry hinges on that last breath that leads into yet another, and the wandering cycle passes between living forms and the tumult of expectation in a suspended state of neither here nor there, leaving its broken traces all around.